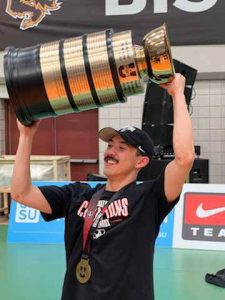 There were a couple of things Vernon’s Landon Currie was contemplating as he looked out his window on a charter bus in Saskatchewan midday Monday, March 28.

One, Saskatchewan is very flat. Two, he and his University of Alberta Golden Bears teammates are Canadian U-Sports men’s volleyball champions.

The third-ranked Bears upset the No. 1-ranked Trinity Western Spartans of Langley 3-1 in the championship game Sunday, March 27, at the University of Manitoba in Winnipeg. Currie and the Bears scored a 25-22, 12-25, 26-24, 25-19 decision just a week after losing the Canada West final to the Spartans.

“It’s pretty surreal,” said Currie, 22, from the middle of Saskatchewan when contacted on his cell phone as his team was spending 14 hours travelling home by bus from Winnipeg to Edmonton Monday. The team drove to Saskatoon on the way to nationals, flew to the ‘Peg, but couldn’t get a return flight.

“I think it’s going to take a couple of weeks before I believe it’s actually true. Yesterday was the best day of my life.”

He, along with Heslinga, was named to the tournament’s first all-star team.

Brodie Hofer had 16 kills and six service aces and Derek Epp added 40 assists in a losing cause for Trinity Western. Former Vernon Christian Royals stars Devin Hofsink and Liam Remple, who have trained with Currie in the off-season, dressed but did not play for the Spartans.

“We were just ourselves,” said Currie of the Bears’ play in the championship. “I think last weekend at Canada West we were doing things not in our wheelhouse. Sunday, we just said ‘Let’s be bold and come out and play the way we can.’”

In the team photo with the Tantramar Trophy and national championship banner, the Bears can be seen with their thumbs down. It was an homage to the baseball movie Bad News Bears, who posed in a similar fashion. Currie says his team used that as a rally cry all season.

“The referees were giving us warnings all week about the thumbs down but I don’t think they had any idea what it meant,” laughed Currie, who is studying business and has one year of U-Sports eligibility left. The former Fulton Maroons standout played his first three years of college ball at Thompson Rivers University in Kamloops before transferring to the U. of A.

Alberta advanced to the gold-medal match by beating the Queen’s Golden Gaels of Kingston, Ont. 3-0 in the quarterfinals with Currie recording three digs, and knocked off provincial rivals Calgary Dinos 3-1 in the semis. Currie had four digs and two set assists.

Trinity Western, which has won medals in six consecutive U-Sports national championship tournaments, defeated the host Manitoba Bisons 3-0 in the quarterfinals, and swept Quebec’s Sherbrooke Vert & Or 3-0 in the final four.

Currie is hoping for an invite to the Canadian Next Gen team’s summer camp in Quebec.